Banners and balls to greet the Tour de France!

The Bradford district is really getting in to the swing of things for when the Tour De France Grand Depart comes to the district on the 5 and 6 July.
Bradford Council have been putting up banners in Bradford city centre and across Keighley to let people know that the biggest annual sporting event is coming to the district. Bunting will be going up in the towns and villages along the route. A clock on the Big Screen in City Park will be counting down the days, hours and minutes until the cyclists set off. The Big Screen will also be showing video clips and information about the big cycle race in the district.
People driving through Silsden may be forgiven for thinking they’re seeing things, as the metal balls protecting the sides of the road near the town are being given a Tour de France make-over.
The balls which are on part of Stage Two of the Grand Depart are being painted yellow, green and red and white polka dot to represent the different coloured jerseys awarded to riders of the Tour.
Artwork reminiscent of Banksy has been appearing at various locations across the district in celebration of the great race’s visit to the district. The ‘life size’ hand cut stencil artwork by anonymous graffiti artist Stewy, depict local literary legends the Bronte sisters and the well known Bradford artist David Hockney.
Councillor Susan Hinchcliffe Executive Member for Employment Skills and Culture said:”Tour de France Grand Depart is a great opportunity to show off the district to its best advantage. Preparations have been going on for months in readiness for the millions of people arriving for the Tour. Now we are just a few weeks away the banners, signs and artwork will remind people that the event is just around the corner.”
Advanced warning signs are also going up across the district to let local people know about the road closures on the route.
More information about the Tour de France in Bradford can be found at www.bradford.gov.uk/tourdefrance. 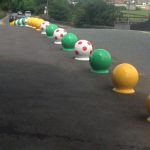 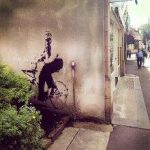 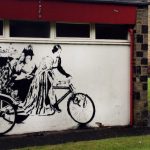 Issued by Alice Percival on 13/06/2014 12:33:01  Follow Bradford Council on Twitter @bradfordmdc or facebook.com/bradfordmdc You can also read Council news and press releases at www.bradford.gov.uk/bmdc/government_politics_and_public_administration/news

By Clerk PC
previous next